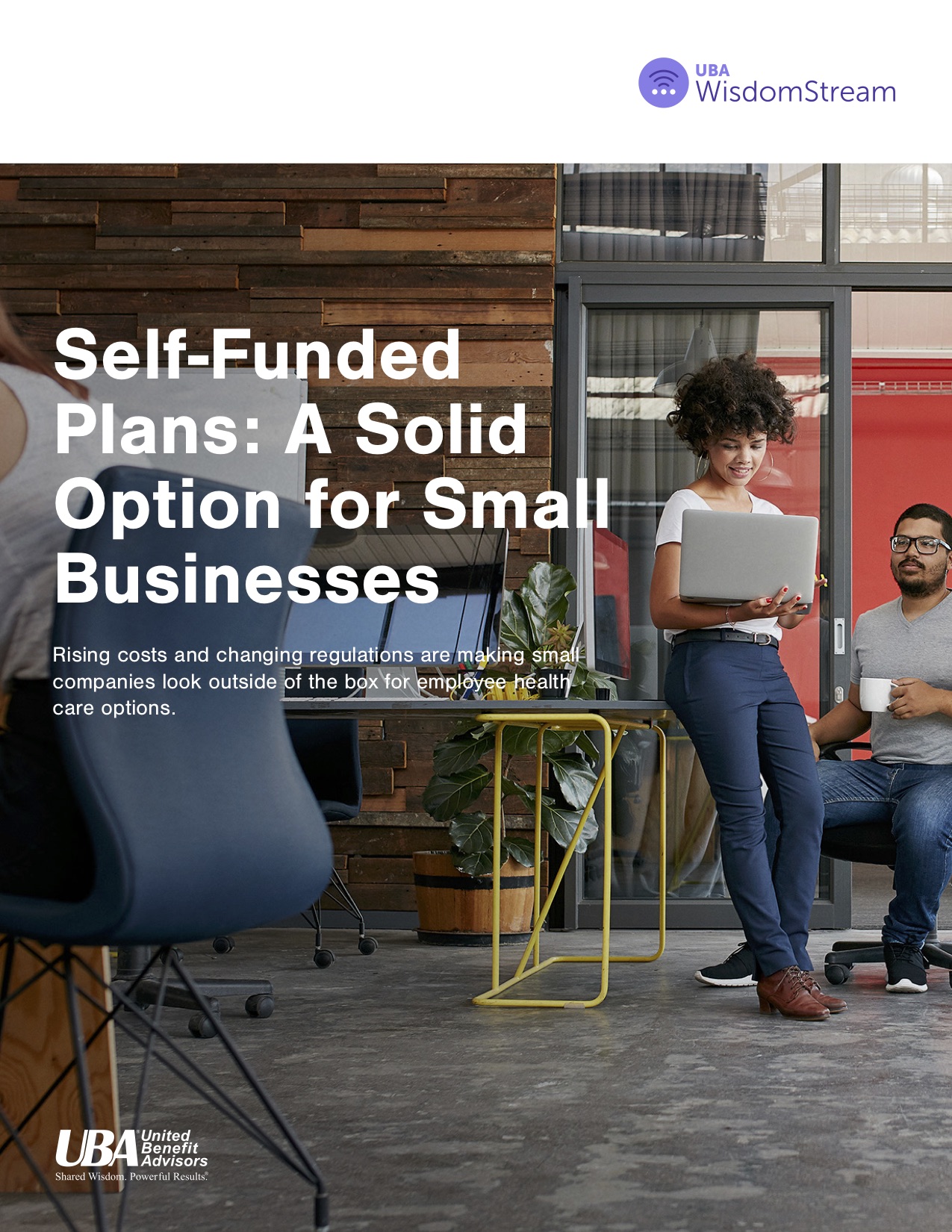 Since the ACA was enacted eight years ago, many employers are re-examining employee benefits in an effort to manage costs, navigate changing regulations, and expand their plan options. Self-funded plans are one way that’s happening.

In 2017, the UBA Health Plan survey revealed that self-funded plans have increased by 12.8% in the past year overall, and just less than two-thirds of all large employers’ plans are self-funded.

Here are six of the reasons why employers are opting for self-funded plans:

1. Lower operating costs frequently save employers money over time.
2. Employers paying their own claims are more likely to incentivize employee health maintenance, and these practices have clear, immediate benefits for everyone.
3. Increased control over plan dynamics often results in better individual fits, and more needs met effectively overall.
4. More flexibility means designing a plan that can ideally empower employees around their own health issues and priorities.
5. Customization allows employers to incorporate wellness programs in the workplace, which often means increased overall health.
6. Risks that might otherwise make self-funded plans less attractive can be managed through quality stop loss contracts.

If you want to know more about why self-funding can keep employers nimble, how risk can be minimized, and how to incorporate wellness programs, contact us for a copy of the full white paper, “Self-Funded Plans: A Solid Option for Small Businesses.”

It was recently unveiled the latest findings from our 2017 Health Plan Survey. With data on 20,099 health plans sponsored by 11,221 employers, the UBA survey is nearly three times larger than the next two of the nation’s largest health plan benchmarking surveys combined. To learn more, watch this short video below.

With Below Average Cost, Increasing Enrollment, CDHPs Have Big Impact

When most experts think of group healthcare plans, Preferred Provider Organization (PPO) plans largely come to mind—though higher cost, they dominate the market in terms of plan distribution and employee enrollment. But Consumer-Directed Health Plans (CDHPs) have made surprising gains. Despite slight cost increases, CDHP costs are still below average and prevalence and enrollment in these plans continues to grow in most regions—a main reason why it was one of the top 7 survey trends recently announced.
In 2017, 28.6% of all plans are CDHPs. Regionally, CDHPs account for the following percentage of plans offered:

CDHPs have increased in prevalence in all regions except the West. The North Central U.S. saw the greatest increase (13.2%) in the number of CDHPs offered. Looking at size and industry variables, several groups are flocking to CDHPs:

When it comes to enrollment, 31.5% of employees enroll in CDHP plans overall, an increase of 19.3% from 2016, after last year’s stunning increase of 21.7% from 2015. CDHPs see the most enrollment in the North Central U.S. at 46.3%, an increase of 40.7% over 2016. For yet another year in the Northeast, CDHP prevalence and enrollment are nearly equal; CDHP prevalence doesn’t always directly correlate to the number of employees who choose to enroll in them. Though the West held steady in the number of CDHPs offered, there was a 2.6% decrease in the number of employees enrolled. The 12.6% increase in CDHP prevalence in the North Central U.S. garnered a large 40.7% increase in enrollment. CDHP interest among employers isn’t surprising given these plans are less costly than the average plan. But like all cost benchmarks, plan design plays a major part in understanding value. The UBA survey finds the average CDHP benefits are as follows:

We recently unveiled the latest findings from our 2017 Health Plan Survey. With data on 20,099 health plans sponsored by 11,221 employers, the UBA survey is nearly three times larger than the next two of the nation’s largest health plan benchmarking surveys combined. Here are the top trends at a glance.
Cost-shifting, plan changes, and other protections influenced rates

Overall costs continue to vary significantly by industry and geography

PPOs, CDHPs have the biggest impact

PPOs Dominate Despite Savings with HMOs and CDHPs

The findings of our 2017 Health Plan Survey show a continuation of steady trends and some surprises. It’s no surprise, however, that costs continue to rise. The average annual health plan cost per employee for all plan types is $9,934, an increase from 2016, when the average cost was $9,727. There are significant cost differences when you look at the data by plan type.
Cost Detail by Plan Type

PPOs continue to cost more than the average plan, but despite this, PPOs still dominate the market in terms of plan distribution and employee enrollment. PPOs have seen an increase in total premiums for single coverage of 4.5% and for family coverage of 2.2% in 2017 alone.
HMOs have the lowest total annual cost at $8,877, as compared to the total cost of a PPO of $10,311. Conversely, CDHP plan costs have risen 2.2% from last year. However, CDHP prevalence and enrollment continues to grow in most regions, indicating interest among both employers and employees.
Across all plan types, employees’ share of total costs rose 5% while employers’ share stayed nearly the same. Employers are also further mitigating their costs by reducing prescription drug coverage, and raising out-of-network deductibles and out-of-pocket maximums.
More than half (54.8%) of all employers offer one health plan to employees, while 28.2% offer two plan options, and 17.1% offer three or more options. The percentage of employers now offering three or more plans decreased slightly in 2017, but still maintains an overall increase in the last five years as employers are working to offer expanded choices to employees either through private exchange solutions or by simply adding high, medium-, and low-cost options; a trend UBA Partners believe will continue. Not only do employees get more options, but employers also can introduce lower-cost plans that may attract enrollment, lower their costs, and meet ACA affordability requirements.
By Bill Olson
Originally Published By United Benefit Advisors

We recently revealed how competitive small business health plans are when compared to national averages—and even how they are doing a better job of containing costs. But the UBA Health Plan Survey also uncovers two challenges these groups face in its new special report: “Small Businesses Keeping Pace with Nationwide Health Trends”.

To help attract and retain employees, Peter Weber, President of UBA, recommends small businesses should “benchmark their plans against their same-size peers and communicate how competitive their plans are relative to average national costs, deductibles, copays, and more.”