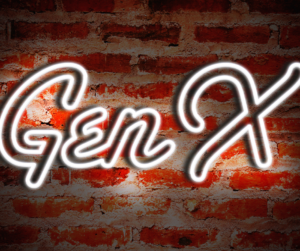 Next, we analyze the smallest generational group, born between 1965 and 1980: Generation X.

The top three myths of Gen X include:

Some believe that this group is characterized as being reactionary and rebellious. In fact, Generation X keeps a much lower profile at work. This group was called “the forgotten generation” by Pew Research. Why? Because they are a smaller group smashed in between two larger generations (Millennials and Baby Boomers). Additionally, they are the generation least likely to be promoted at work. A 2018 Harvard Business Review study concluded that Millennials and Baby Boomers had received two or more promotions in the same period that 66% of Gen X received one or less. Gen X was raised hearing their parents complain about “work-life” balance. Truth is, they are the group most likely to be helping their children and parents in addition to work. This group is a reliable bunch who values loyalty.

While some say that Gen X alienates other generations, this couldn’t be further from the truth. Nielsen research called Generation X the “most connected” generation. Technology adaption played a huge role in their ability to bridge the generations above and below them. Most were not introduced to technology until adulthood. This lack of computer access in their youth helps them relate to boomers in the office. At the same time, they share an excitement for technology with Millennials and lined up alongside them to get their first iPhones. Generation X are natural collaborators and often play the role of connector in the office.

Gen X has worked through several hefty recessions and watched their retirement accounts take devastating hits. Experian reports that Generation X carries more debt than other groups and data from the National Association of Realtors showed this generation more likely to be declined for homeowner loans. So, can you blame them for being cynical? However, a closer look uncovers a different story in the way this shows up at work. Generation X is savvy because of these hardships and surprisingly content. In fact, a Better Hire survey concluded that more than 50% of Generation X participants are happy at work. They show up with an entrepreneurial spirit, owning their own destiny.

In sum, Gen X values stability rather than risk in the workplace. They play an important connector role at work with colleagues and at home with their families. Gen X has “been there, done that” and uses these lessons to make work enjoyable. They are an important piece in the generational puzzle.